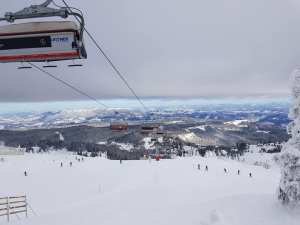 Bosnia & Herzegovina is a mostly forested and mountainous country; the Dinaric Alps run from the north-east to the south of the country with numerous valleys and peaks. The highest summits rise up to 2’386 metres above sea level near the border with Montenegro (Peak Maglic).

In 1984, Sarajevo was the host city for the Winter Olympic Games, evidence of the long history of skiing in Bosnia & Herzegovina. However, the war in 1992 left scars still visible at ski areas today. It is

only recently that the major ski areas have started to modernise, either by building new ski lifts or renovating old ones, as well as building new accommodations. Thanks to these infrastructure improvements, skier visits have increased in recent years, and with it the hope that Bosnia & Herzegovina will find its place among international ski destinations. However, most resorts do not have the means at this stage to install snowmaking systems.

About 5% of the Bosnian population skis. The country has less than 20 ski areas and some are too small to really be considered. Most foreign visitors come from Serbia, Slovenia, Croatia or Montenegro.

Jahorina, Bjelasnica and Igman, the major ski areas in Bosnia & Herzegovina, are located in the Sarajevo region. In addition to these popular places, Mount Vlasic, in the centre of the country, also has a ski resort. In the West, Kupres and Blidinje Natural Park are also 2 destinations for connoisseurs. All resorts in the country provide alternative activities to skiing, such as cross-country skiing and snowmobile tours. It is also possible to night ski. A small but important detail for visitors: in Bosnia & Herzegovina the roads are not routinely salted in the winter, meaning that access to ski areas can sometimes prove a challenge.

Jahorina, which hosted some of the events during the 1984 Olympics, presents itself as one of the major skiing and tourism centres of the Balkans. Damaged during the war in the 1990s, the area has since been refurbished and new hotels built. With its 20 kilometres of runs for skiers of all levels, 5 chairlifts (2 old fixed grip doubles and 3 new detachable 6- pack), 4 surface lifts and a baby lift, the resort features a total hourly capacity of 13’230 skiers. It is located between 1’300 and 1’880 metres above sea level. Visitors have a wide choice of restaurants and a selection of hostels to 4-star hotels. An all-day lift pass amounts to less than EUR 25. Grooming may be of poor quality and the runs are not always well marked. A large part of the mountain was turned into a national park to preserve the natural beauty of the region.

This site uses Akismet to reduce spam. Learn how your comment data is processed.